Nagano 1998 is the first Winter Olympics that I remember watching on TV. Before that I was too young to understand sports. But this time it was properly heated up by the media because of all the NHL stars coming to play for  national teams.  I took the bait.

I remember team Russia nailing every opponent, even defeating Czech Republic in the round robin with a miraculous comeback from 1-0 to 1-2 in the last moment. I was amazed at how well it went, it seemed to me that the Russian hockey team was unstoppable.

Because I was a school kid back then, I couldn’t stay up late to see the games live, I would wait until they are shown in recording the day after. I remember calling my granddad to ask about the finals, and he just told me calmly: “Wait ’til you see it for yourself.”

The final was such a blow to me. Can you imagine that it was the first time I have seen my favourite team lose? And it was the gold medal game of the most prestigious hockey tournament in the world!

I have been waiting for Russia to win gold ever since. I have been granted my wish only 20 years later 🙂 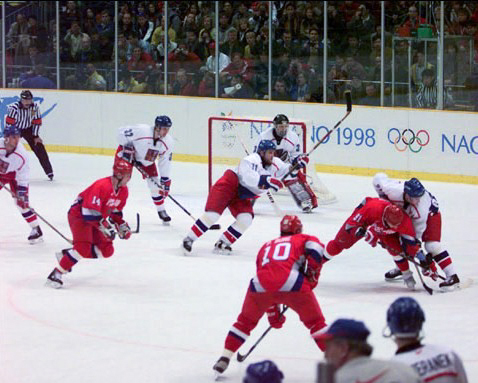 But now looking back at it all, I can see that it must have been such a huge moment for the Czech team. Especially now that I know the back story of Czechoslovakia-USSR relationships. So my schoolboy feelings aside, this looks like a very very impressive documentary about the Czech victory, give it a shot.

This site uses Akismet to reduce spam. Learn how your comment data is processed.